Following the recent defeat in the Norfolk Senior Cup, Salhouse Rovers were on the hunt for a bounce back this weekend against Briston Wanderers.

The team saw new Midfield signing Lewis Nabarro make his debut and Salhouse got off to a flying start after 4 minutes with Craig Boyles slotting home from 10 yards. Soon after, Nabarro opened his account tapping home from a squared ball from Boyles.

Salhouse continued to dominate, but after 25 minutes’ winger Ryan Frankland pulled up with a back injury meaning substitute (and Personal Lines Colleague!) Adam Wengrow was to replace him. It took Wengrow all but 30 seconds of game time before slotting home to make the score 3-0 to Salhouse.

Salhouse continued to push on in the second half as Briston were struggling with team morale. Wengrow missed a wild opportunity to pounce on 65 minutes where he failed to convert a pull-back from Boyles from 12 yards forcing the keeper to make a save. Salhouse had several more attempts but nothing causing the Briston keeper any problems.

After 75 minutes, Ryan Tebble had a tremendous run down the right-hand side, eventually squeezing the ball passed the keeper and his near post.

A solid 4-0 performance from Salhouse which sees them currently in 7th place on 18 points.

We wish them the best of luck when due to play Binham Village (A) on the 12th February! 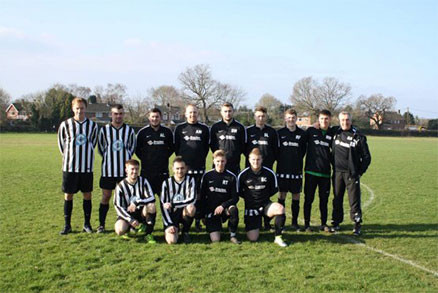